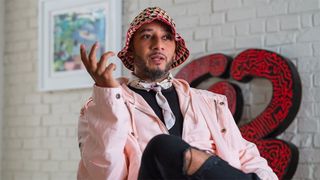 Grammy-Award winning music producer Swizz Beatz is also known to be an avid art collector, as he even introduced Diddy to the iconic Kerry James Marshall Past Times painting, which the hip-hop mogul eventually purchased for $21 million earlier this past Spring.

Now, Kasseem Dean aka Swizz Beatz, has been enlisted by Sotheby’s to curate a contemporary art sale for the company’s Contemporary Curated auction, which will take place in New York on September 25.

We’re pleased to team up with @therealswizzz for our Contemporary Curated auction on 25 September in #NYC. As this season’s curator, the Grammy-Award winning music producer and global entrepreneur (whose birthday happens to be today! 🎂) lends his exceptional creative vision and passion to select his favorite works from the 300+ lots on offer. Swipe 👈 to see a few of his picks, which include works by Jean-Michel Basquiat, Faith Ringgold, Janet Fish and Kehinde Wiley, among others, and check out the link in bio to view all of his favorites from the sale. #SothebysContemporary #HBD #Basquiat

In the video above, Swizz Beatz explains how began to collect art, and expresses that he only “collects art that speaks to me,” after admitting that he used to collect other types of art for his home “just to impress guests.” Further down the line, Swizz Beatz adds that those particular art pieces he had collected initially didn’t evoke an emotional connection which he desired, and eventually relied on picking art that satisfies him completely and looks “past the hype point.”

For the auction, Beatz chose a dozen of his favorite works, ranging from established and emerging African American and Latin American artists, including Kerry James Marshall, Richard Serra, Faith Ringgold and Shara Hughes.

Check out his entire curated selection of artworks by clicking the bar below, as well as more details in the video above.

This “Kidnapped” Banksy Statue Is Expected to Fetch Over $1 Million at Auction
DesignsponsoredNovember 17, 2019
Follow
Highsnobiety Design
What To Read Next
Load More
Search Results
Load More