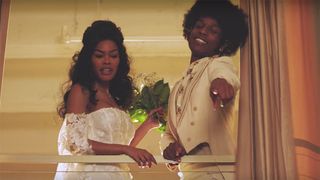 Following January’s release of her “WTP” video, Teyana Taylor is back in support of her 2018 studio album, K.T.S.E., this week sharing the music video for another project standout in “Issues/Hold On.” Taylor herself directed the visual, which boasts a star-studded cast including A$AP Rocky, Tyler, the Creator, A$AP Ferg, Kristen Crawley and Lori Harvey.

A$AP Rocky stars as Teyana’s husband in the clip, and despite their newlywed status, he seemingly cannot stay away from other women. Elsewhere, we see Tyler, the Creator and A$AP Ferg, among others, pop up at a house party during the latter portion of the video.

Teyana Taylor dropped her second studio album, K.T.S.E., last June under G.O.O.D. Music and Def Jam. The LP notes features from the likes of Kanye West, Ty Dolla $ign and Mykki Blanco. You can revisit it below.