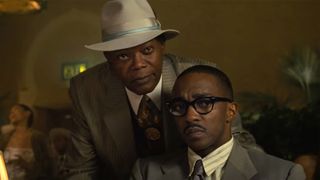 Continuing to deliver a strong lineup of exclusive content, Apple TV+ shares the debut trailer for the star-studded film The Banker.

Featuring Samuel L. Jackson, Anthony Mackie, Nia Long, and Nicholas Hoult, The Banker is based on a true story that centers on revolutionary businessmen Bernard Garrett (Anthony Mackie) and Joe Morris (Samuel L. Jackson), who devise an audacious and risky plan to take on the racially oppressive establishment of the 1960s by helping other African Americans pursue the American dream.

Due to racism and inequality black people faced during that time, Garrett and Morris train a working class white man, Matt Steiner, to pose as the rich and privileged face of their rising real estate and banking empire.

The film is directed by George Nolfi and will hit theaters December 6. Watch the trailer for The Banker.