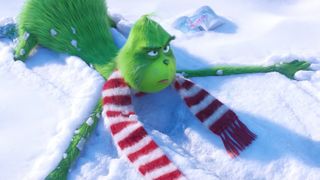 It’s never too early to be annoyed by Christmas. Benedict Cumberbatch is #TheGrinch. In Theaters November 9. Watch the trailer with link in bio.

The holiday classic follows the Grinch and his plans to steal Christmas, but spoiler alert, he eventually experiences a change of heart, empathizing with the citizens of Who-ville. This new trailer, however, showcases how the Grinch is going to great lengths to pull off his Christmas heist, including reconnaissance missions, capturing reindeers, picking on his pooch pal, Max, and we even get a glimpse of the Grinch as a baby.

Co-directed by Scott Mosier and Yarrow Cheney, The Grinch hits theaters on November 9, just in time for the holiday season.

In other upcoming films, ‘The Conjuring’ prequel ‘The Nun’ is terrifying in this first trailer.