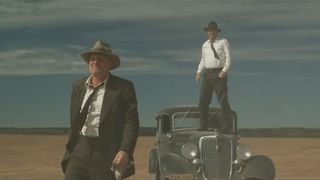 Director John Lee Hancock (The Blind Side) is gearing up to share the untold true story of the two former Texas Rangers who brought down the infamous Bonnie and Clyde. In leading up to the film’s premiere, today Netflix releases the official trailer for The Highwaymen.

Kevin Costner and Woody Harrelson star as the two legendary lawmen tasked with capturing the nation’s most notorious criminals at that time, as the FBI and the latest forensic technology were no match for Bonnie and Clyde. Instead, these two former Texas Rangers relied on their gut instincts and old school skill to locate and secure the bandits.

In addition to Costner and Harrelson, The Highwaymen stars Kathy Bates, John Carroll Lynch and Kim Dickens. You can look forward to the moving coming to Netflix on March 29.

Sparknotes:
– Bonnie & Clyde were bad.
– Harrelson & Costner are good.
– Kathy Bates should be in all movies forever. pic.twitter.com/SuRMoqpAP2

Kevin Smith Is Working on a New ‘He-Man’ Anime Series for Netflix
MoviessponsoredAugust 19, 2019
What To Read Next
Load More
Search Results
Load More