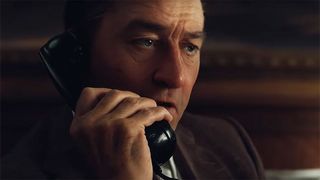 In classic Scorsese (Taxi Driver, Goodfellas) fashion, the film is an epic organized crime saga and stars the biggest names in the genre: Robert De Niro, Al Pacino, and Joe Pesci, who makes his long awaited return to Hollywood in the film.

The Irishman takes place in post-war America and the narrative is told through the eyes of a World War II veteran, hustler, and hitman, Frank Sheeran (De Niro). Spanning several decades, the movie will chronicle one of America’s greatest unsolved mysteries: the disappearance of union boss Jimmy Hoffa (Pacino).

Jesse Plemons and Anna Paquin also star in The Irishman, which lands on Netflix and in select theaters this fall.