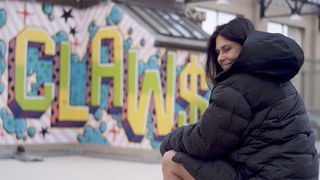 New York is a city of transplants. People from all over the world descend on the tiny island for work, play, and to pursue their dreams. So much so, it can easily seem as though non-natives outnumber tried and true city denizens. Despite that, few people channel the lifeblood of the city like Claudia Gold, known professionally as Claw Money.

Born and raised in Fresh Meadows, Queens, the prolific graffiti artist turned fashion designer has emerged as one of the most prominent creative voices of the era, earning the admiration of musicians like Kanye West and M.I.A. along the way.

“As the landscape of NYC changes, so do the neighborhoods and the people that are living here. I’m happy that my legacy is now interwoven into the fabric that is NYC and that we can continually evolve together. Seeing a claw brings a little joy to your everyday urban experience,” explained the artist of her practice.

She threw on the latest gear from The North Face Cryos line and took us along as she retraced her journey from tagging vans and buses to creating city commissioned art that’s beautifying the Lower East Side.

For fashion lovers with an appreciation for street art, Gold’s Lower East Side boutique, Claw & Co., combines the best of both worlds. Featuring re-appropriated, up-cycled vintage pieces with Claw Money’s uniquely off-kilter sensibility, the 15-year-old work in progress is a reflection of the area where it resides, metamorphosing with every passing year. Although the FIT dropout has been dabbling in fashion for over a decade, it wasn’t until three years ago that she decided to open the Delancey storefront.

“I was about to partner with a really big company and have Claw Money go a bit more mass and at the end I just couldn’t do it. The deal didn’t go through and I said to a friend that I should just open a store,” admitted Gold. “He told me his friend was managing a store on Delancey Street. We met and now I have the keys. It was meant to be. Who knew?”

A Memorial in the Midst of Good Times

Iconic New York dive bar Max Fish is a haven for the Lower East Side’s art scene and a bastion of culture that draws an eclectic crowd of city dwellers. Max Fish, like the city’s sprawling works of graffiti, represent an era and mentality that is wholly New York; one can almost feel the lifeblood of the city pulsating through these landmarks to creativity. For Gold, who is a frequent visitor, it also holds memories of a dear friend who tragically passed away. The loss inspired the Max Fish family to come together (with the help of Claw) to paint a mural dedicated to their former co-worker.

“Dani was one of the most incredible human beings I’ve ever known,” Gold said of the former bartender. “I met her when she was at Max Fish – one of the old locations – and we became fast friends. She moved out to California. She was an avid surfer and died in a freak surfing accident. It’s the most horrible thing, so of course her family at Max Fish decided there was no other place to paint this. They love her so much it had to be here. I painted this with my boy Dub. She really was one of the most incredible woman I’ve ever known. She was too good for the world.”

Discover a Pop of Culture

The LES is Gold’s personal playground and few other projects reflect the artist’s grand sense of fun and affinity for pop culture more than her work on the 100 Gates Project. Located on 98 Rivington, the gate that protects Serafina restaurant during closing hours received a facelift a little over three years ago. Instead of drab metal grating the gate now features a collaborative art piece with Miss 17 (a member of the all-female PMS Crew). Featuring colorful faux nametags infused with Claw’s signature throw-up and quirky, pop-culture facing point of view, the mural embodies quintessential New York.

“The art is for the community even if the community doesn’t really accept it,” explained Gold. “This area is changing so fast that it’s so important to have something real down here. There’s like a Subway every three blocks so it’s important to keep art alive so the neighborhood has its vitality.”

Claws for the Community

Many graffiti artists tend to concentrate their work in a central location, and Claw Money is no different. You’ll find her singular moniker scattered all around LES—although these days only through legal, city commissioned works. Gold’s tagging being funded and facilitated by the city is a sharp juxtaposition from New York’s attitude toward graffiti in the 1980s when there was a concerted effort to eradicate street art. And though she happily works solo, there are times one can see the influence of crew members and close friends who have been commissioned to work on projects alongside her.

The 100 Gates Project is one such initiative; there, Gold’s work on 145 Allen Street reflects a spirit of fun and artistic partnership. So next time you hit the block, take some time to peruse the art—it’s there to beautify your commute, after all.

Five years ago, Gold partnered with American Express on an initiative aimed to support small business in New York with art projects meant to liven up their storefronts. For SoHo, which is often called New York’s most stylish neighborhood, it adds a sense of authenticity to the polished boutiques and luxury stores that line the street. One of the retailers that received the Claw Money treatment was enduring neighborhood staple Little Cupcake Bake Shop. A favorite of celebrities ranging from Justin Bieber to Samuel L. Jackson, Claw Money is just one of many well-known faces to eat there – and in her case, take her paintbrush to the outside wall.

“I love cupcakes,” confessed Gold. “It’s like what do you do in Soho? You eat pizza and you have some cupcakes.”

While Gold has partnered with corporate sponsors ranging from Red Bull to Art Basel Miami, she remains a street artist at heart. More often than not, she still channels the energy of the days she would tag by flashlight, perfecting her throw-up on trucks and tunnels around New York City. It is that mentality that draws her to projects that ultimately aim to reinvigorate local communities. Starbucks’ Delancey street location in many ways was a means to an end – a corporate project that allowed Gold to create a modern and conceptual work that would endure the tst of time.

“Starbucks kind of just reached out to me,” explained Gold. “I think they talked to the guy who owns my building because they saw my work and liked what I was doing. We had a meeting and I drew something similar [to my own building] that was conceptual but didn’t feel too corporate. That’s why the green dots are there, because it was commissioned by Starbucks.”

A Roof with Claws

A short walk from Delancey and Allen, where Claw Money’s Starbucks mural resides, you’ll see Gold’s signature three-clawed moniker rising jauntily from a rooftop. For Gold, who is constantly solicited with commissioned projects, running her store and working with fellow female taggers – like those in her “PMS” crew – opportunities to return to her roots can be scarce. Signature tags that call on her interest in cartoon culture and mind-bending ‘80s art recall her early experimental days, making them a must-see for those interested in the evolution of her work.

“It’s weird because for years I couldn’t look at my old stuff,” she shared with Highsnobiety. “If I’d see pictures of it I’d get the heebies but then when I did my book and I started looking at all of my stuff, I realized it was kind of the best stuff I’d ever done because it was so freeing and so not formulaic.”

One project that demonstrates the genesis between her early work to the signature style she fully owns now is located at 134 Division Street. The bike shop, owned by the artist’s friend Tyrone Williams, is one of the few black-owned businesses on the block; it’s also become a buzzing hub for young bikers and BMX riders. Claw decorated the front grates of the store with the vibrant green, gold and red colors of the Jamaican flag, spelling out “Dah Shop” in blocky letters enclosed by a set of (what else), claws.

Get Schooled on Design

Head up to the roof of the New Design School and take a crash course in the who’s who of graffiti. Last year, as part of a fundraiser for its students, several of New York’s most prominent artists volunteered their time and art to beautifying the rooftop in a bid to raise money for the underfunded art programs.

“If you go to high school here it should have some sort of impact on you,” said Claw. We want people to donate because they have to get people to come in and teach art and music to these kids. New York public schools don’t have that as a part of the curriculum. They used to but now they don’t and kids need that shit.

There are a lot of heavy hitters who showed up for this so it was a really honor to paint up here. Especially for the kids in this neighborhood because they don’t get a lot of extras. For me it’s always been about the message. I think as artists it’s our responsibility to say things without saying them. There’s a message behind this even though it seems sort of basic – that message is that it’s all about the kids.”