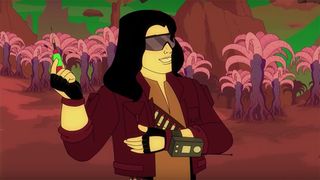 The Room‘s Tommy Wiseau and Greg Sestero are starring in a new animated pilot titled SpaceWorld. Created and written by Brock LaBorde, and animated by Lowbrow Studios, the series “takes down its hair, kicks off its boots, and lets itself be straight-up dumb,” according to the pilot description.

SpaceWorld pits Wiseau and Sestero against one another as Wiseau portrays an intergalactic bounty hunter named TX, while Sestero plays his longtime nemesis, Drogol. The series centers around TX as he is in search of his home planet of which he knows nothing about. Throughout the program we find TX and Drogol exploring the SpaceWorld universe.