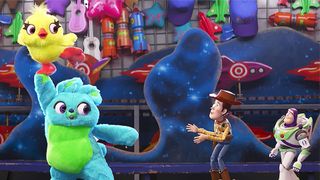 Just one day after the first teaser trailer for Disney Pixar’s Toy Story 4 arrived, the studio has gifted us another. This time, it introduces us to two new characters — Ducky and Bunny, voiced by Keegan-Michael Key and Jordan Peele.

The first teaser (below) features all the usual suspects — Woody, Buzz, Jessie, Mr. and Mrs. Potato Head, Rex, Slinky, Hamm, and one of the Aliens — alongside a new addition: Forky. Forky is in total denial, convinced he doesn’t belong in the toy world, and his existential panic throws the gang into disarray.

Per the official synopsis, the toys are off on another road trip in the fourth installation, one in which they show “how big the world can be for a toy.”

Toy Story 4 is directed by Josh Cooley (Riley’s First Date?), produced by Jonah Rivera (Inside Out, Up), and Mark Nielsen (Inside Out). The picture will arrive in U.S. theatres June 21, 2019.

Are you hyped to be reunited with Woody et al? Share your thoughts in the comments.

In other wholesome news, here are all the holiday movies and TV shows coming to Netflix.