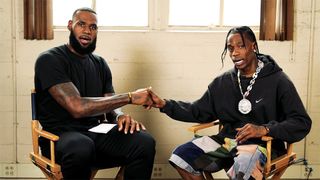 Travis Scott is showing no signs of slowing down following the release of his celebrated new album, Astroworld. After announcing performances at this year’s MTV VMAs, Post Malone’s first-ever Posty Fest, and his own Astroworld Festival, Scott now reveals that he has executive produced the soundtrack for NBA 2K19.

Travis linked up with NBA royalty in LeBron James to discuss the video game and his musical selection for the soundtrack, which features Astroworld cuts and songs by Bruno Mars, Cardi B, Migos, PARTYNEXTDOOR, Fall Out Boy, Alison Wonderland, and more.

Press play above to watch the interview between Travis and LeBron, then visit Spotify to stream the NBA 2K19 soundtrack. The game itself is due out September 11.

Now get your first look at LeBron James as a Laker in the ‘NBA 2K19’ gameplay trailer.