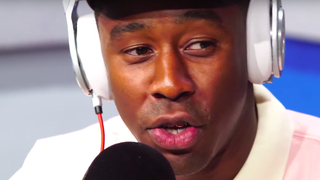 Tyler, the Creator joined Funk Flex on Hot 97 today for an extensive interview and a rare freestyle. At one point in the freestyle, he casually mentions that Golf Wang did $17 million in sales in 2018 from one season alone. He also raps about freeing his friend A$AP Rocky before transitioning to one of many lines about hooking up with men: “Braid my wig, A$AP tat on my ribs, switch with him then I can fuck all the sweet men that I wanna.”

That’s just one of many lines he has about chasing dudes, and the highlight is watching Funk Flex react whenever Tyler tries to rope him in. “Me and Flex looking in the index for buff net n****s just for some hot butt sex,” he raps to his incredulous host.

During the interview, they also discuss Flex’s beef with Odd Future after Earl Sweatshirt called a recent JAY-Z album “overrated.” Watch the full interview above and check out for the freestyle at the end.

And for another lengthy Tyler interview, check out his conversation last week with Zane Lowe.

Did You Spot the All-New Sneakers in Tyler, the Creator’s New GOLF WANG Lookbook?
SneakerssponsoredFebruary 13, 2019

A Breakdown of Tyler, the Creator’s Wild Freestyle Game in 5 Tracks
MusicsponsoredAugust 6, 2019