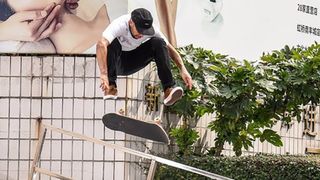 Vans called on its teams from all across the globe to gather in Shanghai for a new skate project, dubbed Shikumen, named after the old Shanghai lane house the crew rented for the month. Skaters from the company’s US, France, Malaysia, Australia, Thailand, Indonesia, South Korea, and Japan squads took turns occupying the residence a week at a time, as they were then able to explore the area and shred the streets by day.

The six-and-a-half-minute clip highlights the likes of Chima Ferguson, Mike Lee, Piet Guilfoyle, Dustin Henry, and many others hitting the city of marble with ferocity, devouring xiaolongbao and dodging scooters along the way. Filmed and edited by Tommy Zhao and Liu Maomao, press play above to watch Vans’ new Shikumen skate edit.

In other Vans news, the company has donated thousands of pairs of shoes and articles of clothing to the victims of Camp Fire in Northern California.

Annie Guglia Is the Skater with a Master’s Degree Competing at the 2020 Tokyo Olympics
SkateboardingsponsoredOctober 7, 2019