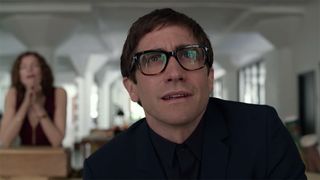 Per the trailer, we see Gyllenhaal starring as an art critic, as the art community is turned upside down when a woman discovers and brings to light a selection of mysterious artwork left behind by her deceased neighbor. These particular pieces seemingly have the ability to come to life and hurt or even kill those who come in contact with them.

Up next, see Anthony Mackie try to escape a toxic earth in Netflix’s post-apocalyptic sci-fi, ‘IO.’