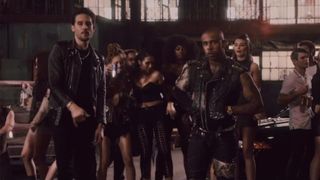 After releasing the audio in June, Vic Mensa is back with the official music video for his Marshmello-produced collaboration with G-Eazy, “Reverse.” The clip, directed by Bobby Hanaford, is set in a post-apocalyptic landscape, as we find Mensa and Eazy preparing for a street car race.

To see who comes out on top, press play above.

You can revisit the album below.