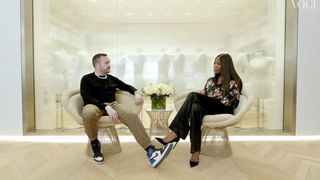 At Paris Fashion Week, Kim Jones made his debut as menswear designer for Dior. In conversation with British Vogue‘s Naomi Campbell, the designer opened up on getting prepped for the runway and why the legacy of Christian Dior should be honored.

When asked about Dior SS19, Jones reflects on why he chose significant pieces from the luxury brand’s archives. This included a wallpaper design which was re-imagined as a suit, and a bee brooch, re-designed in partnership with famed New York-based artist KAWS.

Head over to the site to see how @mrkimjones defined the future for @dior Homme at his debut show in Paris. ?: @eva.al.desnudo for Highsnobiety

“We looked at the bee which is something that was a signature Dior, which we loved in these brooches,” Jones said. “I actually got someone that I really admire called KAWS, he’s an artist in New York, just to refresh it and rebrand it.” Jones also revamped the Dior saddle bag, which originally debuted as a womenswear piece.

Furthermore, the designer went on to discuss his time at Louis Vuitton before making the move to Dior. “Where I was before it was kind of a bit streety, and I wanted to bring that elegance back,” he remarks.

“I’m looking at Dior from a tailoring point of view,” he adds. “You have to know what you’re doing and who you’re appealing to make it work.”

To see the interview in full, press play above, and as always, be sure to sound off in the comments below with your thoughts.

In case you missed it, check out Virgil Abloh‘s interview below.

In other fashion news, here’s where you can buy the very first A-COLD-WALL* archival book.