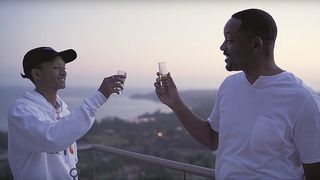 Jaden Smith celebrated his 21st birthday with his friends and the extended Smith family in Malibu, California this week. Will Smith held court as guests filtered in and out during the day. The Aladdin actor used his captive audience to reminisce about raising the ERYS rapper with wife, Jada Pinkett-Smith. See who made the guest list in the video above.

Will had some pearls of advice to impart on Jaden and his friend including, “Never break two laws at one time. Because you increase your chances exponentially of getting caught for both. So only break one law at a time.”

As the evening progressed Will Smith gave a heartfelt toast to his son, saying, “I’m really proud of you, the way that you’ve grown in the last few years, is what parents hope for. You make us proud every single day.”

Will & Jada Smith Stage Intervention Over Fears Vegan Jaden Was “Wasting Away”
LifestylesponsoredSeptember 25, 2019

A Complete Guide to Eminem’s Beefs, From Will Smith to Nick Cannon
MusicsponsoredMay 29, 2020
Follow
Highsnobiety Music
What To Read Next
Load More
Search Results
Load More