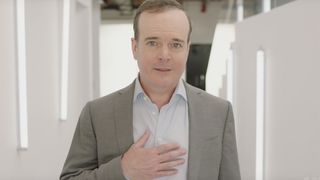 HBO is once again teasing the upcoming third season of Westworld, in the form of a faux ad campaign for a fictitious company called Incite, watch it above.

The commercial promises that the line separating humans and androids becomes even blurrier once the sci-fi series returns. The video is interlaced with inspirational stock footage in what is an eerily life-like ad. “The world is complex, complicated, messy. But life doesn’t have to be. The future is powered by you, and we know you,” an Incite co-founder says as he walks through the stark headquarters. At the ad’s conclusion, it is revealed that the co-founder is, in fact, an android.

All of the previous seasons occurred under the umbrella of the Delos corporation’s theme park, however, this latest trailer suggests that a new android-run company, Incite, will be a key player in season 3. In keeping with the too-close-to-life alternative reality theme, HBO even launched an accompanying website, InciteInc.com. The site promises “to make ‘impossible’ a thing of the past.”

Westworld season 3 is set to debut in 2020. You can watch HBO’s previous trailer here.