Havana guidebooks are outdated relics that not only relay misinformation but highlight an insular view of the city by focusing on places rather than interactions. With help from the team at Havana Club Rum, we set out to discover and share the city’s untapped, underground subcultures for those wanting an authentic experience from the moment they step off the plane.

Using the city’s greatest resource—its people—as our guides, the final installment of our three-part Havana travel experience takes us from a lively barbershop to the idyllic tranquility of the Malécon to the city’s first legal tattoo shop.

Along the way, we meet a barber perfecting a unique haircut, a street artist reimagining Havana, and a female rap duo channeling the golden age of hip-hop. Unlike conventional “tour guides,” these people are deeply entrenched in their respective communities and provide typically unobtainable insights. They share enough information to fill entire days with meaningful and culturally enriching activities and to help avoid the Cuban clichés.

If you’re lucky enough to visit and you’re wondering what to see in Havana, follow our journey here before checking out parts one and two. 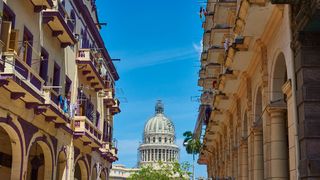 Get a haircut at this barber shop in Old Havana.

Much in the same way that the city’s vintage cars are striking, so is a unique and popular men’s hairstyle dubbed El Yonki. It’s named after reggaeton, star Alejandro Santoya, better known as El Yonki (derived from the word junkie) who rose to prominence in Cuba for his hit “La Barba” and who sported the unique look as he captivated audiences with his provocative lyrics.

It’s part pompadour, part well-groomed mohawk with a tropical bird and shark-esque silhouette. One of the most notable barbers achieving the look in Old Havana is a barber named Christian. “What distinguishes this style the most is that the top part of the hair is very long.,” he explains. “It can be pointy or combed back. On the side is a fade—from long to short—or it can all be shaved off.”

Christian’s shop sits on a quiet street of ornate buildings that wear sun-kissed yellow and green hues. On the afternoon we visit, several men are waiting for their chance in his chair which is flanked by sample photos of different hairstyles a man can choose from. All of them are here for his signature El Yonki.

It’s rather ironic that Havana’s tourists love the thought of abandoning the Internet for a few days, while locals just can’t get enough.

Slowly but surely a Wi-Fi infrastructure is being developed throughout the city. But since it’s still not all encompassing, and illegal in private homes, several Wi-Fi hotspots have become focal points where Cubans and tourists come together to connect. Two such locations are the Parque Fe del Valle on Boulevard San Rafael and the Malécon .

Cuban citizens gained access to Wi-Fi for the first time in June 2015 when government-owned telecommunication company ETECSA installed 35 Wi-Fi hotspots in the main cities’ parks and plazas. By 2016 there were 41 Wi-Fi hotspots. During President Barack Obama’s landmark visit to Havana, he explained the importance of connectivity, stating, “If you can’t access information online, if you cannot be exposed to different points of view, you will not reach your full potential, and over time, the youth will lose hope.”

“The most efficient way to find Internet in Cuba is to find a park where there’s a lot of people together looking at their phones,” explains our local guide Kevin. “To have the Internet only in certain spots in the city—and not everywhere else—has a positive impact. Especially for people that come to visit Cuba who are used to always checking their phones. They can establish a real connection with real life and have the opportunity to have more interaction between them.”

People roam the park looking to sell pieces of paper with long and complicated Wi-Fi passwords on them to those wanting to get on the Internet. They purchase these from government facilities. The slips are then marked up—ranging in price from $2-$5 C.U.C.—and only last for an hour. One trick is to log off before the time is up, keep the password, and log back on at another Wi-Fi spot.

Where to get tattooed in Havana.

Tattoo culture is alive and well in Havana despite there only being a single shop. La Marca is the only “legal” body art shop in the city having opened its doors in January 2015.

Tattooing is neither “legal” or “illegal.” Rather, it exists in a gray area linked to policies enacted by late El Commandante, Fidel Castro, who only allowed certain professions to be deemed “acceptable” by the government.

La Marca owner, Leo Canosa, explains, “tattoo has always been something kind of illegal and something you did in private in your house. The gallery’s purpose is to show people that tattooing is something that shouldn’t be hidden and it’s a form of art.”

The shop feels more like an art gallery than a tattoo shop. Canvases pepper the wall, bound journals featuring tattoo options appear more like kitsch than recommendations, and the shop’s symbol—a sort of all-seeing eye with lighting bolts—is firmly planted on the floor (and later unveiled to be tattooed on Leo Canosa’s father’s arm).

Upon passing through the reception area, we climb a spiral staircase and enter the actual tattoo parlor. On this day, Leo has put a sticker that looks like $100 C.U.C. at the foot of the door to fool visitors into thinking it’s their lucky day.

The shop is full of vinyl toys from the Aliens franchise, immaculately kept bottles of ink, and personal effects belonging to the artists that share the three main stations.

Leo makes it clear that achieving this level of professional polish requires trips to countries like Canada because equipment still can’t be purchased at home. “One of the challenges that a tattooist encounters here in Cuba is how difficult it is to find the tools,” he explains. “There’s neither local suppliers nor a shipping system. And that’s why most tattooists in Cuba don’t have all these sanitary precautions or the right tools.”

Peppered amongst the countless visual abstractions depicting past Cuban heroes like Fidel Castro, Che Guevara, and Camilo Cienfuegos are growing representations by emerging local artists. They represent a new artistic direction and suggest an appreciation for cultural commentators and street artists like Banksy.

One such artist, 2+2=5, is best known in Havana for his renderings of a mask-clad character he calls “Hyprocrite Laugh,” who seems to be in a perpetual state of glee. “I like to paint a lot on destroyed or old walls because I feel like I’m giving them back life,” he explains.

For those wanting to dive deeper dive into Havana’s art scene, the Callejón de Hamel in the Cayo Hues neighborhood—near the University of Havana—is an immersive outdoor experience that first sprang up in the 1990s. The alleyway is home to vibrant murals and installations that act as reminders of the African influences on Cuban culture. The striking artworks transport you into the minds of those who created them.

Catch a live musical performance at the Malécon

There’s been a major shift in the Cuban government’s acceptance of reggaeton music recently. In 2011 it was deemed a cultural menace and subsequently banned a year later from radio and television. But in recent years reggaeton acts have actually been embraced by officials and allowed to perform at Havana’s embassies.

In comparison, musical acts looking to perform more traditional rap music indicative of the golden age of hip-hop from the early 1990s—think acts like De La Soul, A Tribe Called Quest and Gangstarr—have been pushed to the outskirts.

One such act, La Reyna y La Real, faces two challenges. Firstly, they’re making hip hop. Secondly, they’re an all female duo. “To be female rappers for us is something really big and meaningful in our lives,” they say. “For the time we’ve been doing hip-hop, we’ve been through a lot of positive and negative experiences. The negative is when we arrive at a booked performance and it gets canceled because another reggaeton performance is taking place. Currently, reggaeton is the vanguard of the music scene in Cuba. So for mainstream venues, hip-hop is not lucrative.”

Despite having a show at one of the embassies canceled while we were there, La Reyna y La Real believe the Malécon is often the best place to catch live music in Havana. Not only is the scenery idyllic, it’s also the perfect place to bring a bottle of rum and share it with friends. “Whenever we want to share our music with our friends, we visit the Malécon where we can party until the following day.”

It isn’t until you take a moment to experience what—and more importantly who—is around you that you will have a better sense of what to do in Havana. Havana is its people. Their warmth, their curiosity, and their willingness to share the city’s many gems. As more and more tourists visit Havana, there’s fear that it will eventually lose its magic, and that somehow the Cuba we romanticize will become a shell of its former self. But as long as Cuba has Cubans, it will remain one of the best places in the world to absorb culture.

For more on the city, see part one of the Highsnobiety guide to Havana, presented with Havana Club Rum here or meet some of the people energizing the city when we first landed here.