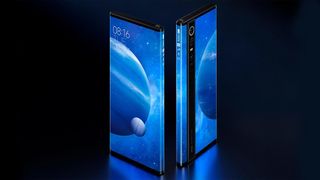 Following the official debut of Apple’s iPhone 11 and iPhone 11 Pro, Chinese electronics company Xiaomi now introduces its latest smartphone that could very well be a game changer. Enter, the Mi Mix Alpha, a phone that is almost entirely made of screen.

The Mi Mix Alpha’s so-called “surround screen” wraps around the device, extending to the camera module on the back side. According to Xiaomi, the phone has more than a 180 percent screen-to-body ratio. Status icons including network signal and battery level are featured on the side of the device, while pressure-sensitive volume buttons appear on the side as well.

The Surround Display allows #MiMIXAlpha to have a screen-to-body ratio that reaches an astonishing 180.6%.

Challenge the impossible, to make the future possible. pic.twitter.com/6l7ZWzUt5P

Letting go of physical side buttons, both sides of the device are pressure-sensitive areas, which in combination with a linear motor simulate the touch of real buttons. #MiMIXAlpha pic.twitter.com/7sKrZdi19I

The Mi Mix Alpha utilizes Samsung’s new 108-megapixel camera sensor, co-developed with Xiaomi. The technology allows for pixels to be combined in two-by-two squares to improve low-light shooting. The phone has no traditional selfie camera, as the back of the device has a display, similar to the front of the phone.

Xiaomi also informs that the Mi Mix Alpha comes with 12GB of RAM, 512GB of storage, a 4,050mAh battery, 40W wired fast-charging, 5G connectivity, and a Qualcomm Snapdragon 855+ processor. The concept smartphone is scheduled to release in December of this year for approximately $2,800.

The Bomber Jacket Will Always Be an Icon & These New Ones Say So
StylesponsoredNovember 4, 2020