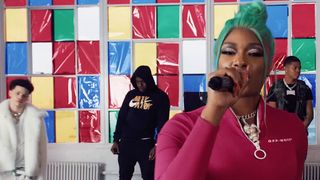 Last month, XXL revealed it’s Freshman Class of 2019. And the publication just delivered one of its much-anticipated cyphers with Megan Thee Stallion, DaBaby, YK Osiris and Lil Mosey. With DJ Scheme spinning the decks, the foursome flexed their lyrical muscle. Watch the full cypher above.

Lil Mosey jumped in first, dropping what may very well be an off-the-dome freestyle. Next was Megan, the only female in the group, whose rapid-fire verse brought the heat. “Rich bitch shit, I might throw a bag at ya / Speakin’ on my name only make it sound better,” she raps in double time.

Last but not least, DaBaby capped things off with a two-minute verse, unloading slickly-worded punchlines at a mile a minute.  Although he previewed parts of this verse on Instagram in April, DaBaby let it be known that he’s the “hottest new” rapper and the internet agrees.

Overall I give this Cypher a 7 out of 10 pic.twitter.com/XwnHmc2Dyr

the freshman in the back knowing their shit was trash compared to #DaBaby 😂 pic.twitter.com/fC4pIT04mX

Meg Thee Stallion and DaBaby walking out of XXL after carrying that freshman class cypher pic.twitter.com/8lLrBq5NVt