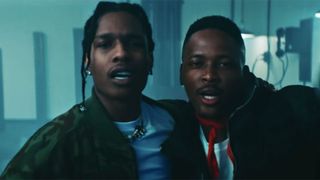 YG has dropped a new track featuring none other than A$AP Rocky. “Handgun” finds the West Coast and East Coast rappers strutting over a trap meets G-funk beat, while the accompanying visual contains more than a few references to Stanley Kubrick’s classic war film Full Metal Jacket. Watch it all go down above.

“Handgun” is set to appear on YG’s new album Stay Dangerous, which is out next Friday, August 3. The record will also contain the previously released tracks “Big Bank” and “Suu Whoop.” Meanwhile, A$AP Rocky recently unveiled the track “Potato Salad” with Tyler, the Creator, and hinted at a full-length ‘WANGSAP’ collaboration between the two.

In other music news, Tyler, the Creator has shared a hidden track from his 2015 album Cherry Bomb. Take a listen right here.