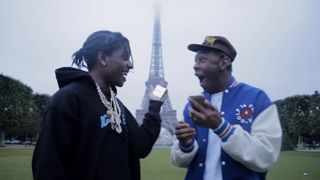 Tyler, the Creator, and A$AP Rocky have joined forces on a new joint called “Potato Salad,” paired with a music video filmed in Paris.

In the video, the two freestyle over “Knock Knock” (a joint which was co-produced by Kanye West and Missy Elliot), and can be seen flexing in front of the Eiffel Tower clad in Chanel and GOLF Le FLEUR*. At one point, Rocky even showcases a custom Dior Book tote embellished with A$AP text.

The piece is full of playful graphics directly referencing the lyrics, like nostalgic Playstation controllers when rapping about playing games, while Leonardo DiCaprio’s head bounces on a pun based on his name. Jaden Smith also makes a brief cameo.

The new short arrives as part of Rocky’s AWGE DVD Vol. 3 and ends with the announcement of a forthcoming WANGSAP collaboration. Earlier this year, Rocky had dropped a string of similar singles in the lead up to his album Testing. Tyler followed suit, sharing “OKRA” and “435”, following up on his 2017 LP Flower Boy.

Watch the video in the gallery above and let us know how you feel about a WANGSAP collab in the comments.

Next, check out Denzel Curry, GoldLink & Twelve’len on “Black Balloons.”