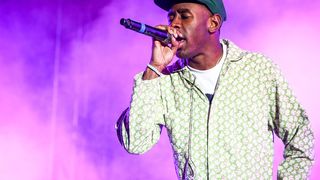 After dropping a take on Playboi Carti’s “R.I.P.,” Tyler, the Creator has shared “QUARTZ,” a new version of a song that featured as part of the Cherry Bomb track  “BLOW MY LOAD.”

The somber tune features vocals by Syd and Austin Feinstein, in addition to a filtered Tyler. After listening to the smooth audio, be sure to his us with your thoughts in the comment section.

In addition to “QUARTZ” and “TIPTOE,” Tyler has been unleashing a slew of loose cuts at a noticeably rapid rate. Previously, he’s also flipped tracks from the likes of Drake, Kanye West and Kid Cudi, and Jacquees, among others. You can stream his other recent releases, including a collaboration with A$AP Rocky, below.

For more, here’s a look back at Tyler, the Creator’s ‘Flower Boy,’ one year later.

15 Drops
The 15 Best Products to Drop This Week & Where to Buy Them
SelectssponsoredJuly 14, 2019

15 Drops
The 15 Best Products to Drop This Week & Where to Buy Them
SelectssponsoredJuly 7, 2019