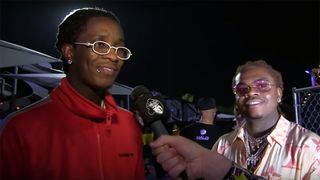 While only briefly, Nardwuar had the opportunity to speak with Young Thug at Rolling Loud in Miami over the weekend. Thugger wasn’t alone, however, during his interview with The Human Serviette, as fellow rapper Gunna was present alongside him for the quick convo.

Young Thug was gearing up to join Travis Scott on stage for a collaborative performance, so he merely had a few minutes to chat with Nardwuar during the festival. Per usual, Nardwuar presented his interviewee with various gifts, while digging deep into the past. Thug touched on his love of Danny Glover and The Flintstones before ultimately being rushed on stage.

To witness the exchange between Young Thug and Nardwuar, simply press play above.