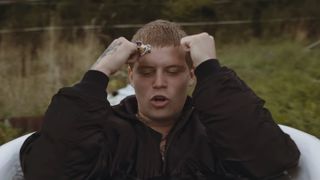 Today Yung Lean shares his latest single, “Happy Feet,” which is slated to appear on his just-announced mixtape, Poison Ivy. The coinciding video for the song was directed by Lean, alongside Marcus Söderlund, as we see the Swedish rapper wandering around a circus wasteland.

Poison Ivy will act as a followup to Yung Lean’s 2017 album, Stranger. It is due to arrive via YEAR0001 on November 2.

In addition, Lean is also gearing up for his specially-curated event of live music and art, Wings of Desire, taking place at London’s Brixton Academy on November 21. Wings of Desire will serve as Yung Lean’s biggest headlining show to date.

In other music news, Post Malone is reportedly Postmates’ most dedicated customer, having spent more than $40,000 on food deliveries over the past year.