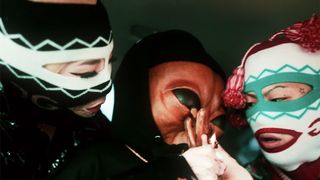 Japanese hip-hop duo Yurufuwa Gang have teamed up with Canadian producer Ryan Hemsworth on their new single “Fresh All Day.” The track dropped earlier this week, and now they’ve released a video to go with it.

“Fresh All Day” is the perfect slacker anthem, with its addictive beat and repetitive lyrics about smoking all day. The video itself sees the Yurufuwa Gang getting weird in Gucci ski masks while caressing an alien and smoking weed (of course). Watch it above.

Yurufuwa Gang is made up of Ryugo Ishida and NENE. They dropped their debut album Mars Ice House in 2017, and followed up with Mars Ice House II last year. Ryan Hemsworth will join the duo on a whirlwind tour through East Asia in April.

Explore the Bang & Olufsen HQ Ahead of Its Anticipated 1017 ALYX 9SM Collab
DesignsponsoredJanuary 8, 2020