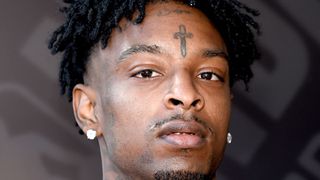 Earlier this week, 21 Savage was released from ICE custody on bond, leaving Irwin County Detention Center in southern Georgia on a private jet back to Atlanta. Now, the rapper has given his first interview since his arrest on February 3, appearing today on Good Morning America.

In an initial clip released by GMA, 21 tells Lindsey Davis of ABC News that his arrest was “definitely targeted.” When Davis asks 21 Savage to recount the details of his arrest, he said: “I don’t even know, I was just driving and I just seen guns and blue lights. And then I was in the back of a car and I was gone.” Asked if police specified to him that he was under arrest, Savage replied “Nah, they didn’t say nothing. They just said, ‘We got Savage.’”

Following the short teaser, Good Morning America has shared the longer interview, in which 21 details his fear of being deported. You can watch the piece at the top of this article.

At the time of his arrest, ICE alleged that Savage arrived in the US in 2005 at the age of 12 on a one year visa that was never renewed, while Savage explained that he first arrived in the United States at the age of 7 under an H-4 visa. He then remained in the US until June 2005, departing for approximately one month to visit the UK, returning to the US with a valid H-4 visa on July 22, 2005.

According to a statement made by 21 Savage’s legal team shortly after his arrest, since July 2005, Savage has been “continuously physically present in the United States for almost 20 years, except for a brief visit abroad.” In 2006, he lost his legal status “through no fault of his own.” When he discovered he had been in the US illegally, he applied for a U visa in 2017.

The statement went on to refute claims made by ICE:

“Mr. Abraham-Joseph has no criminal convictions or charges under state or federal law and is free to seek relief from removal in immigration court. ICE provided incorrect information to the press when it claimed he had a criminal conviction.”

Many have speculated that 21 Savage may have been targeted by ICE in relation to his appearance earlier this month on The Tonight Show. He performed “A Lot” from his new album I Am > I Was, with lyrics criticizing border control. “Been through some things so I can’t imagine my kids stuck at the border. Flint still need water. People was innocent, couldn’t get lawyers.”