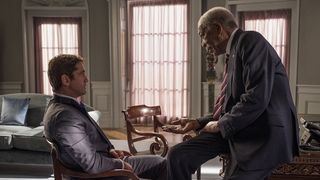 Gerard Butler is reprising his role as Secret Service Agent Mike Banning in director Ric Roman Waugh’s new action-thriller, Angel Has Fallen. The film is the third installment in the Fallen franchise, following 2013’s Olympus Has Fallen and 2016’s London Has Fallen.

Fallen. Framed. Forced to fight for his life. #AngelHasFallen – In theaters August 23. pic.twitter.com/6od2rYTKDs

This time around Butler’s Mike Banning must save new US President Allan Trumbull (played by Morgan Freeman). Just as he learns Trumbull is promoting him to Secret Service Director, Banning is set up to look like he attempted to assassinate the president. Now he is forced to go on the run, not only to prove his innocence, but also to save President Trumbull’s life.

Loyalty is under fire. See Gerard Butler and Morgan Freeman in #AngelHasFallen – In theaters August 23. pic.twitter.com/6EXFxgPtRI

Angela Yee Is Our Life Coach for Dating While Self-Quarantining
LifestylesponsoredApril 17, 2020