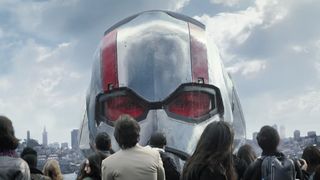 Another day, another hype-building Marvel trailer. The latest drop comes in the shape of a new Ant-Man and the Wasp TV teaser, and it totally gets us in the mood for some bite-sized adventure ahead of the movie’s release this summer.

Landing during Memorial Day weekend, the new TV spot doesn’t add too much to the trailers we’ve already seen, but it does fire up the jokes. After all, what’s a Paul Rudd movie without laughs? Of course, the gags are Rudd-centric, with Ant-Man bringing an administrative element to superhero capers.

“If you wanna do something right, you make a list,” he tells teammates The Wasp (Evangeline Lilly) and Dr. Hank Pym (Michael Douglas). “One — we have to team up; two — we’re gonna have to fight Ghost; three — we’re gonna track down Ghost… that seems like it should be part of two — two-A.”

You can watch the teaser above. Ant-Man and the Wasp will hit theaters on July 6.

Are you excited for the movie? Let us know in the comments.

More in movie news, ‘Solo: A Star Wars Story’ stutters at the box office on its opening weekend.

Dwyane Wade on His 12-Year-Old Coming Out as Transgender: “You Are a Leader”
LifesponsoredFebruary 11, 2020
We Recommend

Kevin Smith Is Working on a New ‘He-Man’ Anime Series for Netflix
MoviessponsoredAugust 19, 2019
What To Read Next
Load More
Search Results
Load More