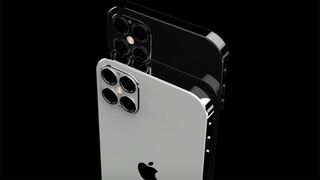 After recently sharing a render of Apple‘s upcoming budget phone, the iPhone SE 2, YouTube channel ConceptsiPhone has released a concept video imagining the iPhone 12. While the clip focuses on the iPhone 12 Pro, it also spotlights the entire iPhone 12 lineup, including brightly-colored models.

The concept video imagines the iPhone 12 somewhat resembling the look of the iPhone 5, with its flat metal edges. The phone is then depicted with a notch-less all-screen display featuring Touch ID on the glass. On the side, the bezel incorporates beefier volume and lock controls.

The front of the iPhone 12 concept welcomes a streamlined front-facing camera, while the back boasts four individual lenses with a flash in the middle, building on the camera set-up of the iPhone 11. Finally, we see a variety of colors in the iPhone 12 lineup, ranging from red, yellow, and green, to the signature black and silver iterations.

Press play above for a glimpse at what Apple’s iPhone 12 could look like.