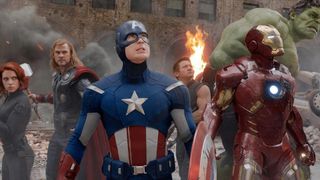 With just over a week to go until Marvel‘s Avengers: Endgame arrives in theaters across the globe, the studio is laying on nostalgia-inducing content, and it’s laying it on thick.

A new trailer has just dropped in preparation for the Avengers‘ final outing, but rather than teasing the new movie’s narrative another time, it runs through every film that has led up to this point — and fully succeeds in getting the hype flowing.

If you were planning on rewatching the entire franchise before it all pops off with Endgame‘s arrival on April 26, the two-and-a-half minute trailer runs through every film you need to catch up on. Starting with Iron Man, the clip cuts through The Incredible Hulk, Thor, Captain America, The Avengers, Guardians of the Galaxy, Ant-Man, Black Panther, Doctor Strange, Spider-Man: Homecoming, Captain Marvel, and every sequel and threequel in between. Watch above.

Fans Think Marvel Edited Someone Out of the New ‘Avengers: Endgame’ Trailer
MoviessponsoredFebruary 4, 2019