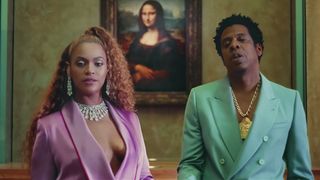 The Louvre museum in Paris set a new visitor record in 2018 of 10.2 million, partly thanks to Beyoncé and JAY-Z.

The power couple filmed the video for their collaborative song “APESHIT” in the museum, which features famous masterpieces such as the Mona Lisa and the Winged Victory of Samothrace.

It’s not just internet speculation crediting the Carters with the spike in visitors; the Louvre’s director Jean-Luc Martinez said, “The Beyoncé video… ensured that the Louvre was talked about across the world, and one of the consequences of that is the spectacular rise in visitor numbers last year.”

In fact, the museum has gone so far as to create a “JAY-Z and Beyoncé at the Louvre” trail, where visitors can see the standout works of art from the iconic video.

Previously the record number of visitors seen by the museum was 9.7 million in 2012. 2015’s terrorist attacks in Paris have been blamed for a decline in tourist numbers, but last year saw international visitors once again flock to the French capital.