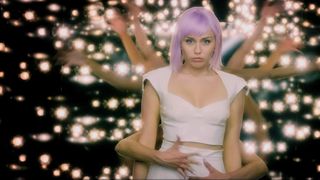 Netflix has just dropped the first trailer for Black Mirror season five and it delivers a look at Miley Cyrus, Avengers‘ Anthony Mackie, and the other stars set to appear in the next installment of Charlie Brooker’s dystopian TV show. Watch above.

In terms of narrative, the one-minute 47-second clip doesn’t give much away, although we know Cyrus will appear in some sort of parallel reality, one character will deal with marital issues, and of course, it’ll be stacked with dark tech-related drama.

‘Black Mirror’ Shares Trailers for Every Episode of Season 5
MoviessponsoredMay 21, 2019