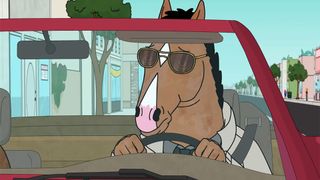 With Netflix’s BoJack Horseman coming to Comedy Central next month, which is believed to be the first such U.S. linear syndication deal for a Netflix original series — season five of the popular adult animated comedy-drama TV show is finally landing on Netflix beginning September 14.

As directed in the post above, the season’s official trailer finds BoJack dealing with his insecurities and instabilities once more, as he stars in a new TV series, Philbert. Also, according to creator Raphael Bob-Waksberg, he points out that the most important element of the new season is Diane’s new haircut.

“This season finds BoJack starring in a new TV show called Philbert, playing a character with disturbing parallels to BoJack’s real life, echoes that force BoJack to confront himself and his past in ways large and small, but the main thing that happens this season is Diane gets a haircut. We spent a lot of time figuring out the haircut — the style, the volume, the bounce, the sheen — and we’re really proud of the way it came out. We really think people are going to like this new season, and Diane’s new haircut!”

You can watch season 5 of BoJack Horseman exclusively on Netflix beginning September 14.

Up next, Netflix shares a trailer for Orson Welles’ final film, ‘The Other Side of the Wind.’