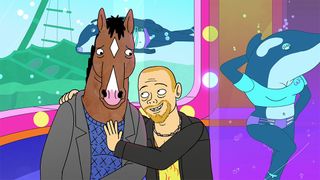 Season five of BoJack Horseman is landing on Netflix starting September 14, and now, the adult animated comedy-drama series is coming to Comedy Central next month, the company announced in an official press release.

Viacom’s basic cable network has acquired the exclusive linear TV rights to all current seasons of the popular Netflix series, as season one will premiere on Comedy Central on September 26, immediately following the Season 22 debut of South Park, while select episodes will be available to stream on Comedy Central’s website and the Comedy Central app.

The agreement is believed to be the first such U.S. linear syndication deal for a Netflix original series, and the BoJack deal was negotiated by Debmar-Mercury and Viacom Program Acquisitions Group.

Comedy Central looks to be racking up its roster of adult animated series, as the network also picked up reruns of King of the Hill and The Cleveland Show from Twentieth Television.

In other animated TV news, the ‘Pickle Rick’ episode of ‘Rick and Morty’ contains a brilliant pop culture Easter egg.

The Creators of Comedy Central’s ‘South Side’ Talk About Their “Jordan Drop” Episode
SneakerssponsoredAugust 14, 2019