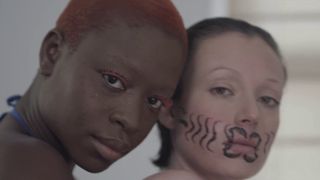 Jae Matthews and Augustus Muller continue to channel the dark spirit of the 80s as Boy Harsher, and their latest single “LA” might be their most lusty anthem yet. For anyone that has been feeling the heat from the flames of the dumpster fire that is our reality, the accompanying visual for this eargasmic synth soundbite will restore your humanity and cause a tingling rush of adrenaline with a dash of pleasure and pain.

Directors Kathleen Dycaico and Jill Ferraro have created the type of bizarre masterpiece that would be most appreciated by fans of Black Mirror or David Lynch as viewers are invited to escape for five and a half minutes with Kathleen and Tara-Jo Tashna. Dycaico elaborated on the concept for the wild narrative in a press release.

“The story follows Hunter + Angel, two country camgirls in love and longing,” she said. “They constantly film and watch their live-streamed love, surviving on cherries and beer, until signs that ‘Time’s Up’ appear in the world around them. Hunter + Angel eventually take their memories out back and use them for target practice, and destroy the images of their love.”

Boy Harsher is currently gearing up for the release of their sophomore album Careful due out on February 1 via Nude Club. Pre-order the record before it drops here.

In other news, Majetic dropped a new video for “Lead Halo.” Peep it right here.

BTS & Halsey Show Off Their Dance Moves in “Boy With Luv”
MusicsponsoredApril 12, 2019