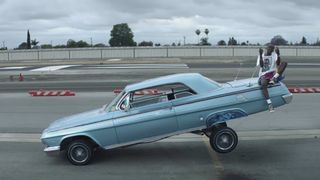 Compton rapper Buddy a.k.a. Simmie Sims III brings viewers directly into his world in the official music video for his newly released single “Hey Up There.” The introspective track comes fresh off his debut album and features Ty Dolla $ign who makes an appearance on the landing strip of the Compton-Woodley Airport in the accompanying visual. Buddy also spends some time on camera at Tomorrow’s Aeronautical Museum which had a huge impact on him as a child.

A few months ago, Buddy teamed up with A$AP Ferg on a song called “Black.” The 24-year-old is slated to drop his Harlan & Alondra album on July 20 via Cool Lil Company/RCA Records. If the visual doesn’t make it obvious, the sky is truly the limit for this promising artist on the rise. Watch the entire narrative unfold above.

In other news, Ty Dolla $ign, Gucci Mane, & Quavo are a pack of fly beach bums in the video for “Pineapple.” Peep it right here.