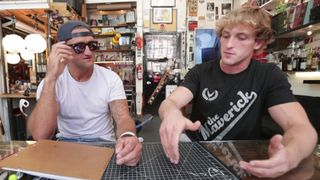 Casey Neistat just released a lengthy, unedited interview with Logan Paul regarding his controversial Japanese “suicide forest” video. The world turned on the YouTube creator early this year after he posted a shocking vlog with footage of recent suicide victim.

After months of social media backlash, Logan Paul wants to give people an inside look at the circumstances that made the events happen through an upcoming documentary. It will roughly tackle his rise to fame, recent fallout, and his now redemption.

While currently filming the doc, he asks Neistat to be apart of the project. Casey agreed, only on the condition that Paul does a sit down interview with him in New York.

“My intention was to see if he is sincere or if the whole thing is a charade for PR, and after watching this whole thing over and over, I’m still not sure,” Neistat says in the video. “To be totally honest I am still not sure releasing it is the right thing.”

Luckily for us, he did. In the thirty minute interview, Casey holds nothing back, calling Logan out on his terrible career choices, being culturally insensitive, and questions if this new documentary is just a PR stunt. Watch the full interview above.

In other news, Seth Rogan replaces Morgan Freeman as the voice of Vancouver’s Public Transit System.

This Tesla Cybertruck-Inspired “Cyberbike” Is Straight Out of ‘Blade Runner’
DesignsponsoredFebruary 5, 2020

How Casetify Is Elevating the Phone Case Industry
DesignsponsoredApril 6, 2020

“The Ballad of Jesse Pinkman” Is a Hilarious Look at His Relationship With Walter White
MoviessponsoredOctober 11, 2019
What To Read Next
Load More
Search Results
Load More