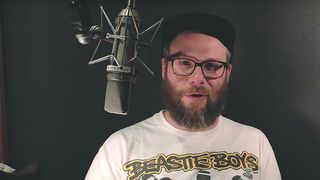 Commuting in Vancouver, Canada just got way more fun — Seth Rogen will be a guest speaker voicing the city’s public transport system, TransLink Ca. The actor replaces Morgan Freeman, who was pulled from the project after allegations of sexual misconduct.

As you’ll see in the video up top, the idea of casting Rogen started on Twitter via the Vancouver-based journalist, Stephanie Ip. She tagged Transit and Rogen in the tweet, and the rest, as they say, is history.

We did it team.

“Any opportunity to enrich the lives of the Canadian people is an opportunity I will take,” Rogen states in the video. “I’m very proud to be from Vancouver, and I grew up taking public transit my whole life and I still use public transit when I’m in the city.”

The actor’s voice-overs are filled with funny reminders that spice up the standard commentary. “I know your bag is probably very nice and you care deeply for it, but that doesn’t mean it needs its own seat.”

I’M GONNA BE THE VOICE ON PUBLIC TRANSIT IN MY HOMETOWN OF VANCOUVER. pic.twitter.com/JduvqtqU3o

Who would you love to voice the transit system in your city? Throw your suggestions in the comments.

Next, medical marijuana is now legal in the UK.

A Stoned Seth Rogen Live-Tweeting ‘Cats’ Is the Distraction We All Need
MoviessponsoredMarch 18, 2020

Seth Rogen Is Making a Horror Movie About a “Killer Meme”
MusicsponsoredJanuary 29, 2020