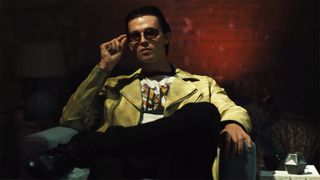 Patrick Schwarzenegger, son of Arnold Schwarzenegger and Maria Shriver, stars in Adam Egypt Mortimer’s new horror-thriller, Daniel Isn’t Real. Schwarzenegger is joined by Miles Robbins in the movie, which is scheduled to release later this year.

In Daniel Isn’t Real, Robbins plays a troubled college freshman named Luke. After experiencing a violent family trauma, Luke copes with the incident by resurrecting his childhood imaginary friend, Daniel (Schwarzenegger). Overwhelmingly charismatic at first, Daniel does his best to help Luke achieve his dreams before things take a turn for the worst and Luke is pushed to the edge of sanity as he loses control of his mind and soul.

“Daniel himself had to be such an incredibly handsome and charismatic young man, who is also sinister and [the actor] had to pull off all the secrets and mysteries that are revealed about the character. Patrick was forged in the fires of incredible genetics, and has a personal confidence, and a technical awareness of the camera, that allowed him to be free and weird and sexy,” Mortimer told Entertainment Weekly.

Janelle Monáe Stars in New Horror Movie ‘Antebellum’ From ‘Us’ & ‘Get Out’ Producers
MoviessponsoredNovember 22, 2019