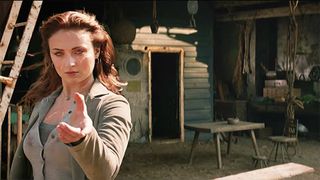 Last night, 20th Century Fox dropped the second trailer for its upcoming Marvel epic, X-Men: Dark Phoenix. At two and a half minutes long, this new clip is a deeper dive into the peril facing the X-Men at the hands of one of their own, Jean Grey (aka Phoenix), as she is taken over by dark, god-like powers and starts to threaten her friends and the world.

Sophie Turner (Game of Thrones) stars as Grey, who has been hit by a cosmic force during a space rescue mission and returns to Earth unstable and ridiculously powerful. As she struggles to regain control of her abilities and inches closer to the dark side, chaos erupts. “When I lose control, bad things happen,” she says in the trailer. Watch above.

As well as the trailer, Fox has released a new poster depicting Grey/Phoenix’s inner battle between dark and light.

‘X-Men: Dark Phoenix’ Could Lose Up to $200 Million After Tanking at Box Office
MoviessponsoredJune 11, 2019

Critics Say ‘Dark Phoenix’ Is a Disappointing End to the ‘X-Men’ Franchise
MoviessponsoredJune 6, 2019