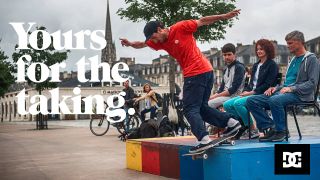 Before skateboarding took over our collective consciousness, DC Shoes team rider Leo Valls faced many of the same problems in his French hometown that plagued skaters around the world.

In a city that’s historically been averse to skateboarding — Bordeaux, France once banned it and local cops would even chase and ticket would-be skaters — Valls made it his mission to turn the tide on its image while working with the city to embrace the sport.

In this 17-minute documentary presented by DC Shoes, Valls explains the complicated relationship between Bordeaux and the local skate community, and how he sought to repair the cultural rift between the two. Valls details his ambitious vision that brought skaters, artists, and city officials together to the bargaining table.

“In 2019, with the popularity of skateboarding, cities and politicians they’re gonna have to stand against or for skateboarding,” explains Valls. His diplomatic approach worked, and city officials finally allowed skateboarders access to some of the best city center spots where skating was once illegal. “To me, the city of the future integrates an art-form like skateboarding in the city planning.”

Watch the full documentary above to see how Valls transformed Bordeaux into a skate-friendly city, and learn more about the footwear that helped him do it.