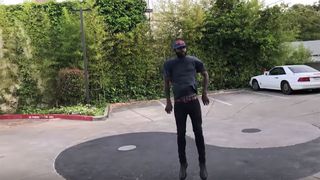 Death Grips have shared a new music video for “Flies”. According to the video’s YouTube page, the song is track two on their upcoming album Year of the Snitch. No release date for the experimental hip-hop group’s sixth album has been set, but “Flies” marks the third single from the project so far, following “Black Paint” and “Streaky”.

Check out the video for “Flies” above, featuring MC Ride jumping up and down in a parking lot with a giant yin-yang emblem, with plenty of strobes and digital footage to switch things up.

In other music news, Gucci Mane dropped an iced-out video for “Solitaire” featuring Migos and Lil Yachty. Check it out here.