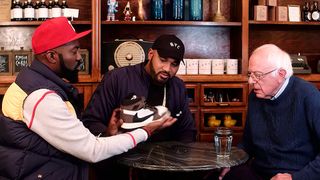 Desus and Mero sat down with Democratic presidential candidate and bonafide fashion icon, Bernie Sanders to unpack some of the nation’s most pressing issues. Watch above.

The Bronx-based late-night hosts quizzed Bernie on his discussions with Bronx icons; Cardi B and Alexandria Ocasio-Cortez. He also spoke about the upcoming election and his plans to legalize weed nationally.

From there the conversation shifted to the thorny issue of sneaker reselling. Sanders was visibly outraged at the resale price on a pair of Travis Scott x Air Jordan 1 . When presented with a pair of Off-White™ x Nike Air Jordan 1 “Chicagos,” the Vermont congressman conceded that it “looks like a nice sneaker” but “I really don’t like that idea of people paying $4,500 bucks for [shoes].” “Is this a status thing?” he asked, to which the Bronx duo responded, “it’s a flex.”

When Bernie found out the $11,000 resell price on the Nike Air Yeezy 2 “Red October” he gave it a hard pass.

But it’s towards the end of  the Showtime segment that they trio get into the truly important issues; what constitutes a “Bernie approved drip.” Sanders sees $45-50 as a reasonable price for a sneaker, making him more a New Balance kind of guy. Keep your eye out for the custom Air Bernie’s featuring shoelaces, rubber soles.