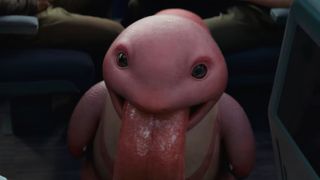 Just to recap, the movie is based on the Nintendo 3DS title of the same name, and it follows 21-year-old Tim Goodman played by Justice Smith, as he takes on a case where his father Harry Goodman has disappeared. Like the game, Tim joins forces with the wise-cracking Detective Pikachu to solve the case.

In the 30-second trailer above, we see new extra footage that was not featured in the full debut clip, such as Pikachu speaking in Spanish but calling it French, an extended look at the Mr. Mime interrogation scene, and even our first glimpse at another Pokémon, Lickitung, animated in the film’s live 3-D rendering.

Enjoy the new teaser clip as Detective Pikachu is slated to hit theaters on May 10.