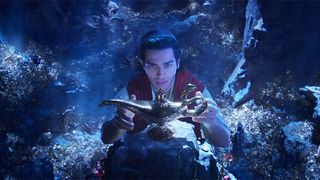 Disney just unveiled the first teaser trailer for its live-action Aladdin movie that is set to be released in May 2019.

The teaser is the second official look we’re getting at the movie after Will Smith unveiled the official poster. Smith will play the Genie.

While the teaser is only just under a minute and a half long, it dives straight into things by giving us a look at the Cave of Wonders, Mena Massoud as Aladdin, and more.

The teaser’s opening scene is a frame-by-frame recreation of the original animiation and is paired with an “Arabian Nights” instrumental.

Watch the first clip from the upcoming live-action film above and stay tuned for the first full Aladdin trailer, which will presumably drop soon.

Will Smith stars alongside Naomi Scott, Mena Massoud, Marwan Kenzari, and Navid Negahban. Aladdin is set to hit theaters on May 24, 2019.

In other news, Apple’s original TV content could be coming to iPhones and iPads for free. Read more here.

Disney’s Bambi Is the Latest Classic to Get a Live-Action Remake
MoviessponsoredJanuary 25, 2020