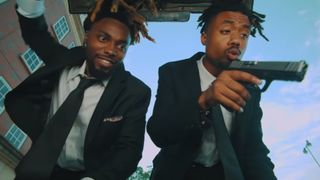 Gearing up for the release of their upcoming project, MirrorLand, Dreamville duo EarthGang drop new visuals for their single “Ready to Die.”

Focusing on the subject of morality, the rap pair are shown in various hallucinatory series of deadly scenarios as they play both the victim and attacker from movies like Pulp Fiction and The Shining. The music video ends with a haunting police video of Olu and WowGr8 in the middle of a muddy rainforest, shot dead before zooming out to reveal the album title “MirrorLand” alongside the release date “09.06.2019”.

Watch the wild video for EarthGang’s “Ready to Die” above.

Earthgang on Making Transcendental Rap & Living Up to Their Endless Potential
MusicsponsoredSeptember 6, 2019