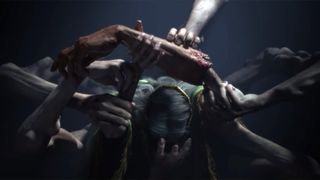 The news was verified at Microsoft’s E3 2019 keynote, where fans were treated to a suitably epic cinematic trailer of the forthcoming title. “I doubt you could even imagine it, ” hisses the game’s protagonist. “That which commanded the skies, giving life its fullest brilliance. The Elden Ring. Shattered, by someone or something. Don’t tell me you don’t see it. Look up at the sky. It burns.” Unfortunately, there was little in the way of gameplay footage.

FromSoftware, helmed by legendary video game designer Hidetaka Miyazaki, is responsible for some of the biggest games to emerge over the last decade. These include Dark Souls, Bloodborne, and Sekiro: Shadows Die Twice.

“This is a FromSoftware title through and through,” game director Hidetaka Miyazaki said in a press release. “We sincerely hope you look forward to it.”

Elden Ring will release on Xbox and PC.

Work From Home
The Best Formal Trousers to Bring the Business to Your Casual While WFH
SelectssponsoredMarch 25, 2020