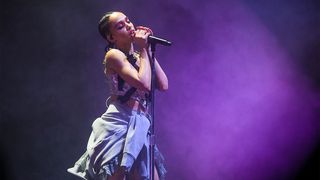 After teasing her Future-featuring track on Instagram, FKA twigs has dropped “Holy Terrain,” along with the accompanying video.

She recently told i-D that Future’s guest verse “is beautiful. I love sad Future. I love when he gets emo, when he expresses himself. It’s just so beautiful when he opens up.”

“Holy Terrain” will feature on Twigs’ forthcoming album Magdalene, which is due to arrive this fall via Young Turks. The Nicolas Jaar-produced record bears the same name as her 2019 tour.

Her hit “Cellophane” will also appear on her long-awaited second album.