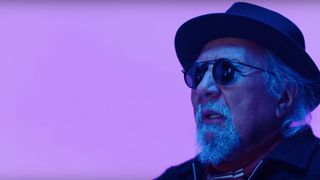 The commemorative watch sees the G-STEEL rendered in a sleek black colorway with blue accents on the dial and buckle, as well as an IP case back, button, and band keeper.

The GSTB100BNR-1A comes with several of G-SHOCK’s key features including solar-powered charging capabilities, a super LED light, Neo-Brite luminous hands for maximum visibility, and Bluetooth low energy technology that pairs with smart phones. Take a look at the watch on wrist in the video above, created with Blue Note artists Charles Lloyd, Kendrick Scott, and lophiile.

Take a listen to an overview of the catalog, which begins with the label’s very first session, and continues with John Coltrane’s “Blue Train” and “Moanin’” by Art Blakey & The Jazz Messengers. It also features tracks from their current roster including Charles Lloyd, Ambrose Akinmusire, Brian Blade, Terence Blanchard, Robert Glasper, and Norah Jones.

Gorillaz Team Up With G-SHOCK For the Second Time on Another Colorful Collab
DesignsponsoredSeptember 16, 2019